Scientists have found that all our problems can be placed under one heading: Seriousness.

Seriousness is the leading cause of everything from Cancer to Reincarnation. Scientists have already discovered a new source of healing this condition. It is a psychic energy point located between the heart chakra and the throat chakra.

It is called the Clown Chakra.

If people are feeling miserable, if they have financial problems, if their relationship situation is the pits, if they are in ill health, if they have a need to sue people, if they find fault with their brother, then obviously, their Clown Chakra is closed.

When this happens, the scientists have observed under a high-powered microscope that the cells of every organ display a sad face, and when the Clown Chakra is open and functioning normally, the cells display a happy face.

The scientists realized that if a person is ill, it is because his mind has projected guilt onto the cells of his body and has forced out the love that is normally found within each cell of the body. The cells are therefore saying, “I Lack Love,” or “ILL” for short. The scientists also discovered that all disease is due to the fact that the cells are out of ease or dis-eased.

When the Clown Chakra is opened and working (or rather, playing) properly, the psychic mechanism sucks up misery, pain, anger, resentment, grievances, unhappiness, etc., and converts the energy into tiny red heart-shaped balloons.

The red heart-shaped balloons contain Love and Joy. These balloons are directed to the dis-eased cell or situation, and a happy face appears instantly. When the light enters the darkness, the darkness is gone. Sometimes these red heart-shaped balloons are called endorphins, due to the fact that when anyone experiences them, the feeling of separation ends. They experience being back home with All That Is. Hence they are no longer an orphan. This is the well-known end-orphan effect.

So, if you think someone is attacking you, Clown Scientists recommend that you visualize sending that person red heart-shaped balloons filled with Love and Joy.

Remember to always keep your Clown Chakra open… and remember to keep laughing.

Sending you bright blessings and many red heart-shaped balloons! =) 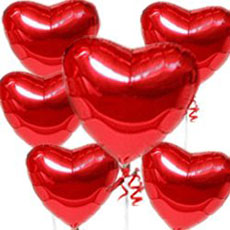