Hello everyone. Today I am bringing you an advanced technique that I’ve been using with my Conscious Energy Healing clients for a few months now. When the information for this technique first came to me, it was yet another “of course” moment, wherein I knew this was going to be another powerful process in helping you to not only increase your grounding and centering, but also one that will help you to feel better and have a clearer sense of self as well. I do this process after setting myself into the center of my head, and before I set my grounding on release.

This heart centered connection of our inner child and our soul is very powerful. We all want comfort, peace and relief. In using this process, along with the rest of the grounding, you will achieve that every day.

Bright Blessings to you all. =)

At the beginning of this new year, I asked to receive a new affirmation that would be powerful for everyone, no matter what is going on and in all situations, so that we can move forward throughout this year, strongly and confidently. The affirmation I was given is that and so very much more. It is in two parts with the second part being changeable depending on the situation you’re dealing with. Here is the main affirmation that will help you in all ways and with all things:

“I release the fear, and allow my life to flow”

Now I’d like to talk about the first part of this power statement. Unless you’ve really been working on yourself and have done this type of releasing already, you are currently dealing with fear on some level. It almost can’t be helped. It is part of our nature as an animal on this planet that we have this program deep within our psyche. Our animal brains were given the ability to tell when something was going to endanger us, either directly by way of a physical threat, or indirectly by way of depleting our food sources. All animals have the same reaction to these situations. Fight or flight. If the predator is of a size that we believe we can overcome, then we fight. If the predator is too big or too numerous to fight, then we flee the area and try to get away as fast as possible.

This is what all fear is about, and why the first part of the affirmation says “the fear”. It is that signal inside us that says either we’re dying, or are about to die, unless we fight or run. Despite the human race evolving on many levels, that program has not yet left us. We still feel it almost every day. We call it different names now, such as anger, depression, jealousy, etc. All of the emotions we term as “negative” have their basis in that fear. Of course the main difference now is that, for the most part, we are not under that same type of mortal threat. Unless we deliberately put ourselves into actual physically dangerous situations, we are not about to die. But tell that to our animal brain when the boss, or our spouse, or some idiot on the street starts yelling at us, or the bills pile up, or the car breaks down. We immediately go into the fear.

Because this is an almost automatic response, we hardly pay any real attention to it on a conscious level. We don’t stop ourselves in the moment that the fear comes up and ask ourselves, “Are we really in danger? Is my life being threatened in this moment?” and because we don’t ask that, it becomes a pattern of allowing ourselves to go into the fear any time we feel a threat on any level. That fear is what keeps us under stress. The stress is what creates the diseases that we end up having, because our bodies can’t handle that energy. Letting go of the fear removes the stress, which then allows our bodies to normalize and become healthy.

By saying even just the first part of the affirmation, “I release the fear”, you are beginning the process of becoming aware of what you are doing to yourself, and taking the steps to change it. The more you allow yourself to be aware of how your thinking and your emotional reaction is changing your energy, the more you’ll use tools like this to let go of what doesn’t work for you. Let’s move on now to the second part of the affirmation.

This is the part that can be changed to suit any situation. You can, of course, just use the main one without changing it, and still get great effect from it, or you can allow yourself to come up with appropriate words for the second part to fit whatever is going on in your life in this moment. As an example, say you are not feeling very loving with yourself and others. Simply change it to say “I release the fear, and allow my love to flow”. This is one of the beautiful things about receiving this kind of information. It is literally infinite. I highly suggest that you use my Grounding and Centering technique while using this affirmation. Simply see the fear moving down your grounding cord and into the center of the earth as you release it. This will aid you greatly in letting that energy go, and feeling better right away.

Here are some more examples that you can use to change any aspect of your life quickly, cleanly and easily:

May this affirmation help you to release the fear and allow your life to flow with ease, beauty and strength. =)

Over the past 35 years, I’ve been asked, been given, or had suggested to me that I read an incredible amount of books on the subjects of metaphysics, self help, human potential and esoteric teachings. Most have been in the good to very good category. Eldon Taylor’s book, “I Believe ~ When What You Believe Matters!” is in the really very good group. Mr. Taylor is a best selling author and after reading this book, I can see why. His style is informal and easy to read, and yet you will get an amazing amount of information. This is not dull reading at all. 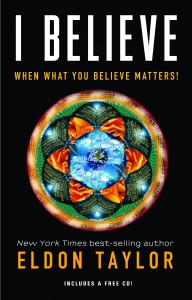 “I Believe” centers around our beliefs, our belief systems and how we come to have them. Each chapter brings new information and new perspectives for us to look at and understand how it is we have the beliefs we do. The very first chapter asks us point blank, “Who Am I?”. From there, the knowledge that Mr. Taylor has gained over the last 30 years guides you through the labyrinthine trail of our beliefs and shows you, very clearly and precisely, how to change and let go of those beliefs that no longer work and serve you, and to replace those outdated ones with new, fresh, clear beliefs and belief patterns that do serve you. From our beliefs about God, to what is good and evil, to Unattachment, Enlightenment, achieving Balance, and many other belief systems, Mr. Taylor shows us how we come by them, and how to check if they are valid in this moment. At the end of each chapter, Mr. Taylor gives you a “reflection” for what you’ve just read and asks you go back over it and ask yourself the questions he poses. The answers you come up with may very well surprise you.

To give you a small sample of what you will read, here’s a quote taken from the book:

“The courage to change your life is a process, one step at a time. The wisdom required to take that action rests within all of us. With every step we take, our confidence increases and we realize the true power of the gift of life. In this process, we find that believing in ourselves unlocks so much magic that life takes on an entirely new glorious nature.”

It should be obvious to you now that I recommend this book very much and am happy to tell you that it is now in a complete paperback edition from Hay House. Starting today, May 7th, they are having a paperback edition launch party over at Progressive Awareness. They are also giving away some very special prizes that I know you will want to get in on. Once you’ve read “I Believe”, I’d love to hear your comments and stories of how it’s helped you and your family. =)

P.S. As my own special bonus, if you purchase a copy of “I Believe” during this launch party, email me a copy of your receipt and you’ll receive a $20 an hour discount on my Conscious Energy Healing sessions. =)

This moment is what matters. =) 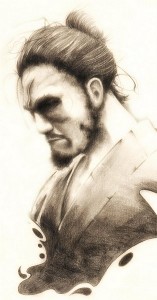 I have no parents:
I make the heaven and earth my parents.

I have no home:
I make awareness my home.

I have no means:
I make understanding my means.

I have no body:
I make endurance my body.

I have no eyes:
I make the flash of lightning my eyes.

I have no ears:
I make sensibility my ears.

I have no limbs:
I make promptness my limbs.

I have no strategy:
I make “unshadowed by thought” my strategy.

I have no design:
I make “seizing opportunity by the forelock” my design.

I have no miracles:
I make right action my miracle.

I have no principles:
I make adaptability to all circumstances my principle.

I have no tactics:
I make emptiness and fullness my tactics.

I have no talent:
I make ready wit my talent.

I have no friends:
I make my mind my friend.

I have no enemy:
I make carelessness my enemy.

I have no armor:
I make benevolence and righteousness my armor.

I have no castle:
I make immovable mind my castle.

I have no sword:
I make absence of self my sword.

Deep gratitude and appreciation to Stuart Wilde for giving me this creed. I first heard it when I attended his magnificent “Warrior’s In The Mist” 8 day intensive many years ago. It is powerful because of it’s simplicity and straightforward approach to living. I would suggest that you add this, along with the Warrior’s Prayer, to your daily meditations. The changes that will come about for you will be amazing. =)

Samurai image courtesy of Rodolfo Carvalho at Atelier and DeviantArt with much gratitude.